Please restart your game to make sure you have the latest version!

They´re currently aware of the following issues with this patch, all of which may be temporarily solved by relogging:

They´re aware of the existence of issues with explosive jars and jump “boosting”. they’ll work to get these fixed this week.

Issue where waterskins cannot be filled at a nearby river are investigated. Waterskins may still be filled from a well.

They´re aware of an issue where foundations and placeables do not have a visible preview when in single player/local mode. Dedicated multiplayer servers do not experience this issue.

News from the Development Team! A short insight about what’s coming in the next couple of days:

• Small Placeables will no longer claim land (!)
• NPC Camps now have their own land claim to prevent people from building so close to them that they stop spawning NPCs (!!)
• You should no longer get phantom duplicates in the wheel of pain
• T2 Altars should no longer disappear
• Surrender should no longer break early when using fists
• Removed invisible collision that was blocking a certain chest in the world
• Arrows will now longer shoot in “Random crazy directions”
• Ranged weapons should now always fire correctly
• Rhinos should no longer try to walk through players
• Palisades will now correctly deal damage on contact
• Palisades should now be easier to place
• Fixed a case where players were able to destroy rocks with their fists. Sorry, but this privilege is reserved only for Conan himself.
• Fixed an issue where interactable objects would spam “Press E to interact” on the GUI
• Added an arrow to many placeables to help players orient them correctly
• The Offering of Mitra recipe now correctly requires 1 human heart and 1 unblemished meat
• Fixed an issue with stair placement detection
• The Gong and the Horn will now be audible over greater distances
• Added new emotes that can be learned by tracking down Story NPCs and getting them to teach you

• Some feat requirements have been simplified or removed. For example, it is now possible to learn Journeyman Craftsman as soon as you hit level 10. Due to the impact of this change all players have gotten a free feat respec.
• Ansel will now respect collision preventing people from moving through walls and other structures
• Non Admins will be restricted to 2 meters of movement when using Ansel
• Balance pass on Bows. Simple Bow range has been increased, Hyrkanian Bow range has been dramatically increased. Crossbow range has been reduced but they now shoot much faster
• We have done an overhaul on what monsters can damage which tier of buildings. If you haven’t upgraded from sandstone you might want to think about doing that.
• Increased crafting XP across the board with greater increases for crafting more complex (higher tier) items
• Inverted Wooden Roof Wedge and Stonebrick Frame now require Journeyman Craftsman instead of Master Craftsman
• Black rocks in the starting desert are now harvestable
• Higher grade tools will now yield higher amounts of secondary resources (Bark/branches)
• Resetting your Knowledge Points will no longer cause you to lose your selected religion
• Removed Corruption sources from starting area caves
• Removed the Regen component from Purified Meat. This perk is reserved to Mitra’s Ambrosia and Healing Potions. Purified Meat is still an extremely good food source
• Player corpses can only be harvested for religious purposes once every 30 minutes
• Balance pass on the amount of materials requires for basic chemistry potions
• Armor drops removed from chests
• Emus will now give less XP

Do you have a problem to find a special landmark? Do you have to meet with someone and dont know where you are? Well – the user rawberry1110 created a map with all landmarks in a very fashionable way, including a “dangerlevel” for each. You can simply download this map, print it or open it on your mobile phone while playing. If you like this map, give the autor a “like” on his reddit page!

This is a lil tool which should help serveradmins find these little pesky structures blocking the respawn of NPCs. You’ll have to upload your game.db to this tool and it returns all coordinates of obstructing structures. Use these coordinates with the teleport console command and destroy the structures to make the NPCs spawn again.

Some people accidentally loose their religion after they use the Yellow Lotus Potion. This way you’ll loose the Tier 1 Altars and you need 50 skillpoints to relearn them – but there is hope! You can get the Altars for free if you visit the NPC for your religion.

You find the location on either our Livemap or on the map attached here, created by Trixon87 from Reddit. 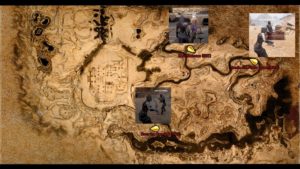 It’s pretty common after a while to see some people on his own servers, which are just toxic for the server. Here is a short tutorial how to ban these players from the server:

Step 1: Activation of the Admin-Console.
I suggest reading this article on how to open the admin console: “http://www.conan-exiles.org/en/cheats-for-conan-exiles/”

Step 3: Select the Tab “Player List” on the top middle.
This will return a list of all players on the server

Step 4: Select BAN on the player you want to get removed from the server

We dont ask why you want to cheat, we just tell you how it works 😉

If you want to cheat some items, you’ll have to be either in singleplayer mode or an admin on a server. You can read this tutorial on how to get admin access on your server.

After you’ve gained admin access, you’ll have two possibile ways of cheating items. The first is using the in-game GUI (Admin Console), which is pretty limited in functionality. We suggest using the Cheat Console. You can open it by pressing ` / ~ / INSERT (depends on your language). Then you just have to enter the command SpawnItem <ITEMID> <AMOUNT>.  Of course you have to replace <ITEMID> and <AMOUNT> with the values you want. You can look up the itemid on this page.

One of most difficult thing about coordinating a clan in Conan Exiles is that it’s incredibly hard to keep track of all the locations of outposts, good resources, enemy bases, or other interesting things. How great would it be if each Clan had a map, on which everyone could mark points of interests? You can do exactly that with our Map Tool for Clans.

To place a marker, click on the spot where it’s supposed to be. A little bubble will pop up asking you for a name, a description, and a choice of icon. After you’ve entered it, click on okay to save the marker.